Dermacentor albipictus: Common on white-tailed deer–also known as the winter tick or moose tick–is distributed throughout Canada and the northern United States, extending southward to California and through the western states to Texas. It feeds primarily on on a wide variety of wildlife (elk, deer, bear, mountain goats and sheep) but will feed on horses and other livestock. Dense infestations or large numbers on hosts are common and severe cases of anemia can occur as a result.  This is a one-host tick, with all stages (larvae, nymphs, adults) feeding on the same individual. 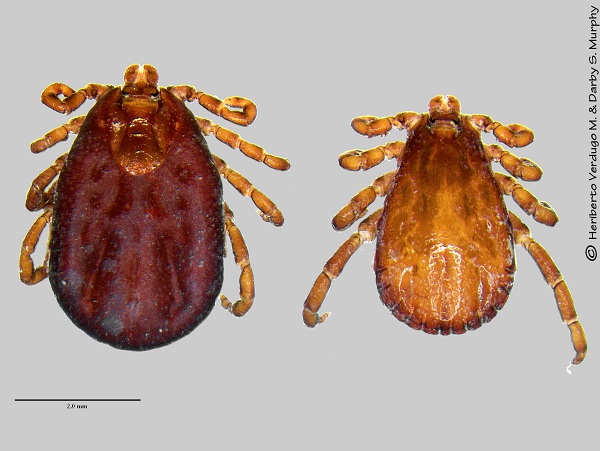 Haemaphysalis leporispalustris: Most commonly found feeding on rabbits and related animals-also known as the rabbit or grouse tick– rarely if ever feeds on humans and is not considered a significant public health risk.  It most closely resembles the wood tick and has a three-host life cycle (requires three separate hosts to complete the life cycle from larva to nymph). Larvae and nymphs may live on rabbits and hares but also some species of birds, most notably the ruffed grouse. Recent research has supported the possible role of H. leporispalustris in the enzootic maintenance and transmission cycles of a Brazilian strain of Rickettsia rickettsii in Latin America in rabbits (Oryctolagus cuniculus) (Freitas et al. 2009). 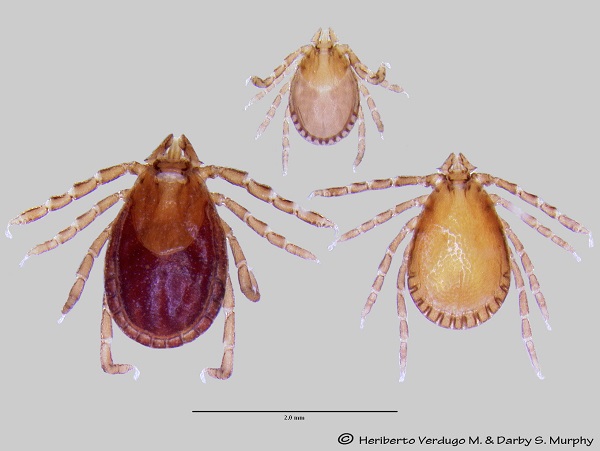 Haemaphysalis chordeilis: Most commonly associated with birds (One record from Oconto County)– also known as the bird tick. (No image available).

Ixodes angustus: Voles, mice, rats; is widely distributed throughout North America from Alaska to the southwestern United States and is primarily a parasite of rodents (mice and voles) and shrews, although it may be found on a wide variety of hosts, including humans. It is often associated with cool, moist habitats and is not known to “quest” for hosts on above ground vegetation but rather in microhabitats in or around the nests or burrows of preferred hosts (Sorensen and Moses, 1998).  {However, specimens were collected on tick drags in 2012.} 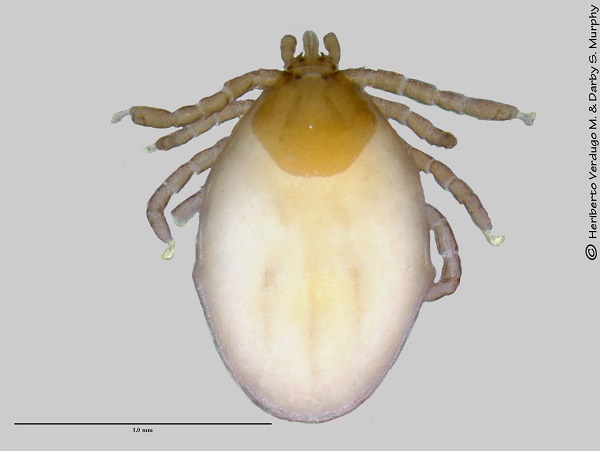 Figure 3.  Nymph of Ixodes angustus, collected from rodent in Wisconsin.

Ixodes brunneus: Most commonly associated with birds–all three life stages of I. brunneus have been reported to feed exclusively on birds (Keirans and Litwak, 1989) and this species has been associated with tick paralysis in wild birds (Luttrell et al., 1996). Limited information is available concerning the biology and life cycle of this ixodid tick species and its impact on the health of wild bird species.  (No image available).

Ixodes cookei: Most commonly feeds on carnivores and woodchucks, occasional on humans–also called the groundhog or woodchuck tick–primary hosts for this tick are a variety of carnivores and rodents and can be especially abundant on groundhogs (Marmota monax). I. cookei tends to be highly host-specific but has been known to feed on humans and domestic animals (Ko, 1972 and Smith et al. 1992). This species is very similar in appearance to Ixodes scapularis and thus microscopic examination is required to properly distinguish between the two species. I. cookei may be present anywhere east of the Rocky Mountains, in particular, New England, the upper Midwest, and in southern areas of Canada. These ticks rarely quest or search for hosts on vegetation but are more commonly found in or around burrows of their hosts. This species has been associated with the transmission of Powassan virus (Chernesky 1969; Artsob, 1989; Calisher 1994). The natural transmission cycle of Powassan virus includes the enzootic transmission between Ixodes cookei and Ixodes marxi and small and medium-sized rodents and carnivores (McLean and Larke, 1963; Main et al. 1979). There is another lineage of the virus, named the “deer tick virus” (DTV) lineage apparently maintained in an enzootic or natural transmission cycle between I. scapularis and the white-footed mouse (Peromyscus leucopus) (Ebel et al. 2000; Telford et al. 1997).  Occasional specimens are found feeding on humans. 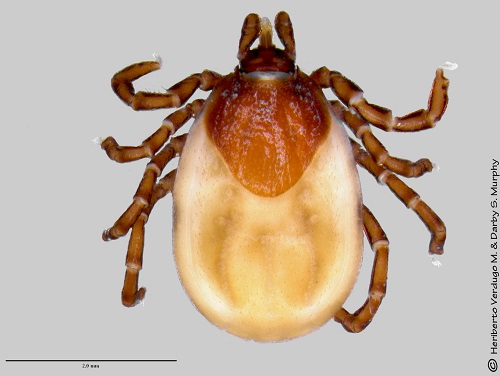 Ixodes dentatus:  I. dentatus is primarily an ectoparasite of rabbits and hares, most commonly the eastern cottontail rabbit (Sylvilagus floridanus). Immature stages are also commonly collected from birds. Clifford et al. (1969) reported the presence of Rocky Mountain spotted fever (Rickettsia rickettsii) in I. dentatus collected from birds in the eastern U.S. and Borrelia burgdorferi, the bacteria responsible for causing Lyme disease, has also been recovered from I. dentatus in Georgia (Oliver et al. 1996), Massachusetts (Telford and Speilman 1989), Missouri (Oliver et al. 1994) and Virginia (Levine et al. 1991). Not commonly found feeding on humans. 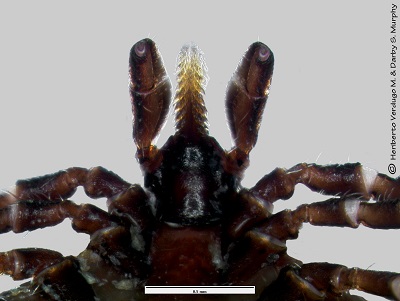 Figure 5.  Mouthparts of Ixodes dentatus, collected from rabbit in Wisconsin.

Ixodes marxi: Most commonly associated with squirrels– also known as the squirrel tick. The natural transmission cycle of Powassan virus includes the enzootic or sylvatic transmission between Ixodes cookei and Ixodes marxi and small and medium-sized rodents (mice and voles) and carnivores (McLean and Larke, 1963; Main et al. 1979). 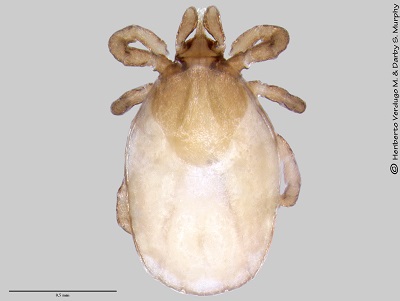 Figure 6.  Nymph of Ixodes marxi, collected from a red squirrel in Wisconsin.

Ixodes muris: Birds, mice, shrews–also known as the mouse tick. Ixodes muris ticks are most commonly found in the upper northeastern United States and Canada but can be found in Wisconsin (Bishopp & Smith, 1937; Lacombe et al. 1999). I. muris primarily feeds on small rodents and passerine birds (Dolan et al. 2000). Dolan et al. (2000) demonstrated in the laboratory that I. muris larvae and nymphs are capable of transmitting Borrelia burgdorferi, the agent responsible for causing Lyme disease in humans and domestic animals, but is a relatively poor vector compared to Ixodes scapularis. In other words, this tick species is unlikely to play a very important role in the transmission of Lyme disease to humans or other mammalian species.

Ixodes sculptus: Most commonly associated with squirrels and their predators, usually burrowing mammals– also known as the sculptured tick. A study in a prairie-rodent community in north-central Colorado focusing on host usage and seasonal activity patterns of nymphal stages of I. sculptus and I. kingi determined I. sculptus was most frequently collected from ground-dwelling sciurid rodents, especially thirteen-lined ground squirrels (Spermophilus tridecemlineatus) and nymphal loads were highest on commonly infested rodent species from the months of May-August (Salkeld et al. 2006). An extensive review of a summary of published North American records of mammalian hosts of  I. sculptus by Salkeld et al. (2006), showed this species has been recorded from humans, domestic animals (cat, dog, goat), 13 species of carnivores, 34 species of rodents, and three species of lagomorphs. The vector competency or role in enzootic or natural maintenance and transmission cycles of one or more human pathogens of I. sculptus remains unknown. There is a report of an I. sculptus infected with Colorado tick fever virus (CTFV) (CDC, 1976) and Spermophilus spp. ground squirrels which I. sculptus was found to commonly infest in this study, are considered one of the main enzootic vectors of CTFV(Carey et al. 1980, Bowen et al. 1981). However, the only current experimentally proven vector of CTFV is Dermacentor andersoni (Emmons 1988, Bowen 1989). Further experimental vector competency studies are warranted to clarify the role of I. sculptus as a potential competent vector for CTFV and other human pathogens. 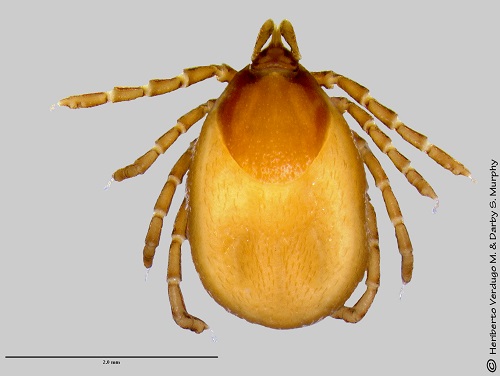 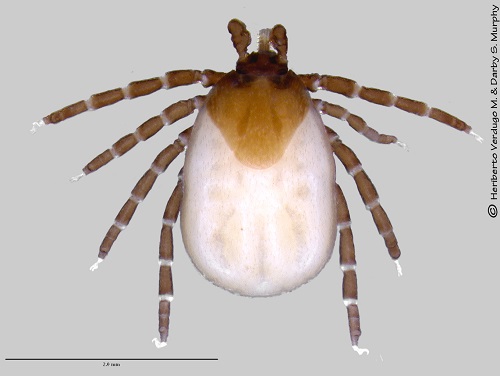 Ixodes kingi: Probable but currently has not yet been recorded in Wisconsin. Has been recorded in Iowa and Michigan. Carnivores, ground squirrels, prairie dogs– also known as the rotund tick. A study in a prairie-rodent community in north-central Colorado focusing on host usage and seasonal activity patterns of nymphal stages of I. sculptus and I. kingi determined I. kingi was most frequently collected from sciurid thirteen-lined ground squirrels (Spermophilus tridecemlineatus) and heteromyid and murid rodents such as the northern grasshopper mouse (Onychomys leucogaster) and nymphal loads were highest on commonly infested rodent species from the months of May-August (Salkeld et al. 2006). An extensive review of a summary of published North American records of mammalian hosts of  I. kingi by Salkeld et al. (2006), showed this species has been recorded  from humans, two species of domestic animals (cat, dog), 17 species of carnivores, 40 species of rodents, and four species of lagomorphs. The vector competency or role in enzootic maintenance and transmission cycles of one or more human pathogens of I. kingi remains unknown. There is a report of an I. kingi tick being infected with Francisella tularensis, the agent for tularemia but tick vectors known to be capable of transmitting F. tularensis are members of the genus Dermacentor (Jellison 1974) and Ixodes scapularis (Hopla 1962). There has also been a report of I. kingi infected with Coxiella burnetti, the agent responsible for causing Q-fever in humans (Sidwell et al. 1964). Established experimental tick vectors of C. burnetti include Dermacentor andersoni, Rhipicephalus sanguineus and the Australian tick Ixodes holocyclus and several other species (Davis and Cox 1938, Smith 1942, Maurin and Raoult 1999, Dantas-Torres 2010).  (No image available).