Figure 1: Diagram depicting the lifecycle of blacklegged ticks that can transmit Lyme disease. 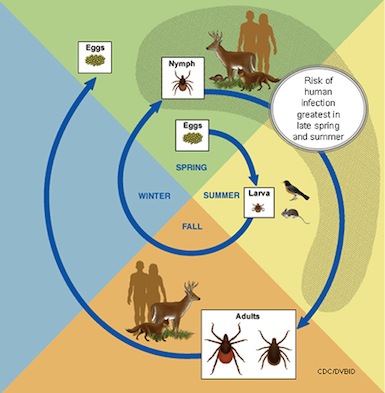 Ixodes scapularis, commonly known as the blacklegged or deer tick has four life stages; egg, larva, nymph, and adult (male and female). The blacklegged tick is considered a three-host tick where each mobile stage (larva, nymph, adult) feeds on a different host animal. This tick species feeds on a wide variety of mammals as well as birds and, occasionally, this includes domestic animals and humans. 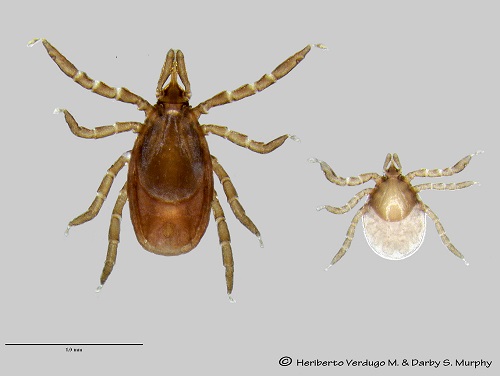 Stage 1 (egg) – Blood-fed or engorged females lay eggs on the ground typically beginning in late spring, usually near the site where they detach from their hosts.

Stage 2: (larva) – In the summer of year one, eggs deposited in late spring hatch into six-legged larvae which feed once on a variety of small mammals or birds. Engorged larvae drop from the host to the ground where they overwinter and molt.  After hatching, larvae do not carry tick-borne pathogens–such as the bacteria Borrelia burgdorferi which causes Lyme disease–but may pick up pathogens during their first blood meal from a diseased host and subsequently transmit such pathogens during their second and third feedings as nymphs or adults. Larval stage I. scapularis are rarely infected with Borrelia burgdorferi or other tick-borne pathogens. In spring of the following year, larvae emerge as eight-legged nymphs.

Stage 3 (nymph) –  In year two, nymphal stage blacklegged ticks will begin to feed and peak activity is typically from May through July but this may begin earlier depending on the climate. At this time, the nymph may transmit disease-causing organisms to humans or to wild or domestic mammals. Both larvae and nymphs have the potential to become infected with Lyme disease bacteria (B. burgdorferi) and other tick-borne pathogens when they feed on infected white-footed mice (Peromyscus leucopus), chipmunks (Tamias striatus), or certain species of birds. The white-footed mouse is the principal source (reservoir) of B. burgdorferi, Babesia microti–the organism which causes the majority of cases of human babesiosis and Anaplasma phagocytophilum– the organism which causes human granulocytic ehrlichiosis.

The nymphal stage is more likely to transmit tick-borne pathogens to humans due to their small size (less than 2 mm– about the size of a poppy seed) which makes them harder to detect and remove. Adult blacklegged ticks, though they may be infected with tick-borne diseases, are more likely to be found on a person’s or domestic pet’s body and removed.

Stage 4: (adult) – During the fall, nymphs molt into adult male and female ticks. Adults seek medium to large mammalian hosts, particularly white-tailed deer (Odocoileus virginianus) during the fall and warm days of winter and the spring. The females feed on deer and other large mammals, mate, lay eggs, and die. If females don’t feed in the fall, they try to find a large mammal host the following spring. A frost does not kill blacklegged ticks and adults may become active as soon as it is above freezing. Occassionally they can be spotted during a temporary thaw in the winter. Adult male blacklegged ticks attach to a host to wait for females, but are not thought to take a blood meal and therefore are not known to transmit tick-borne pathogens–they can however be infected during the larval or nymphal stages if they take a blood meal from an infected host animal. White-tailed deer are the principal host for the adult ticks, an important means of transport and tick abundance is closely linked to the abundance of these animals. White-tailed deer are not considered competent reservoirs for Lyme disease (Garnett et al. 2011).

Here is a link to a video from the University of Rhode Island TickEncounter Resource Center demonstrating: “How Do Deer Ticks Become Infected with Lyme Disease?”